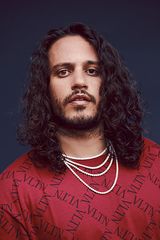 Russ is a 27-year-old multi-platinum rapper, songwriter, and producer. He initially rose to fame by releasing a song a week independently for two years. His debut album, There’s Really a Wolf, was certified Platinum in 2018 with 15 million singles sold, and was recognized on the 2018 Forbes Hip-Hop Cash Kings list. Russ now headlines sold-out arenas around the world, and his songs have surpassed 4 billion + streams worldwide.