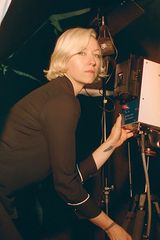 Christina Lonsdale is a conceptual artist who came to prominence through her photography lab, Radiant Human, where she utilizes the Aura Camera to read people’s auras, a discipline that shores up the distance between New Age self-discovery and New Media self(ie)-actualization. Dubbed “the Annie Leibovitz of aura photography” by the New York Times and a “Dutch painter on acid” by Vogue, she has been an artist in residence at the Whitney Museum of American Art, shot aura photographs on site at the Museum of Contemporary Art Tucson, and worked with numerous brands including Nike, Google, Nordstrom, Refinery29, and Urban Outfitters. Her work has been featured in the New York Times, Vanity Fair, W, ID, Vogue, Teen Vogue, Harper’s Bazaar, Nylon, and Time Out. She lives in New York City.