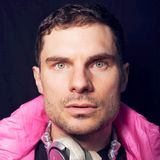 Flula Borg was born and raised in Germany, starting his career as a Schuhplattler dancer before bringing his absurdist humor and spontaneous charm to all corners of Hollywood. On the big screen, Flula is best known for starring opposite Rebel Wilson and Anna Kendrick in Universal Pictures' Pitch Perfect 2 and in Orion Pictures’ Buddymoon, which won the Audience Award at Slamdance. On the small screen, Flula has had roles in Curb Your Enthusiasm, Silicon Valley, and The Good Place to name a few. Flula is a regular guest on TBS’ Conan, having served as Conan O’Brien’s (partially nude) tour guide in Berlin.

Flula has amassed 96 million views on YouTube, and over 1 million subscribers across Instagram, Facebook, and YouTube. He was chosen as one of Variety‘s 10 Comics to Watch, was named one of Hollywood Reporter‘s Top 25 Digital Stars, and won a Streamy Award for Comedy in online video.

Mostly, he loves to learn about America.