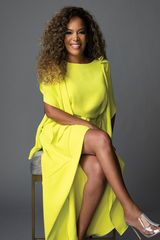 SUNNY HOSTIN is a three-time Emmy Award-winning journalist, executive producer, author of the Summer Trilogy, and co-host of ABC’s The View. She received her law degree from Notre Dame Law School and her undergraduate degree in communications from Binghamton University. As a federal prosecutor, she was awarded a Special Achievement Award by then Attorney General Janet Reno. A native of New York City, Sunny lives with her husband and two children in Westchester, New York.