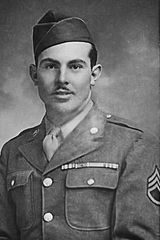 Arnold “Ray” Lambert (1920-2021) joined the U.S. Army in 1940 and served as a medic in the invasions of North Africa, Sicily, and Normandy. For much of the war, he was staff sergeant in charge of a 30-man detail in the First Division’s famed 16th Regiment. Lambert earned the Silver Star and multiple Bronze Stars and Purple Hearts. He saved many lives. After the war, he started two successful businesses in the Boston area. His memoir, Every Man a Hero, was published in 2019 and became a New York Times bestseller.