OWEN NICHOLLS is a screenwriter with a masters in scriptwriting. His first screenplay—a biopic of the filmmakers Powell and Pressburger—was optioned to Bedlam Productions, the BAFTA- and Academy Award–winning producers of The King’s Speech. His work has appeared in Empire and NME, and in 2018, his debut novel Love, Unscripted was selected for the Escalator talent development program run by the National Centre for Writing. Nicholls has worked at the Toronto International Film Festival and at Toronto’s Vanguarde Artists as a script reader. He lives in Norfolk, England, with his wife and children. 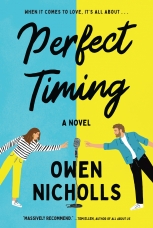