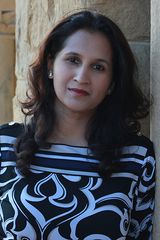 Shaili Jain, M.D. is a British born American Physician of Indian ancestry.  She is a psychiatrist and Post-Traumatic Stress Disorder specialist and currently serves as the Medical Director for Integrated Care at the VA Palo Alto Healthcare System. She is a trauma scientist affiliated with the National Center for PTSD, a consortium which is widely regarded as the world's leading center of excellence on PTSD, and a Clinical Associate Professor affiliated with the Department of Psychiatry and Behavioral Sciences at the Stanford University School of Medicine.

Dr. Jain’s work is widely accredited for elucidating the role of paraprofessionals and peers in the treatment of American veterans with PTSD. Her research has been published in some of the most prestigious medical journals, such as the Journal of the American Medical Association, Psychiatric Services and the Journal of Traumatic Stress, in addition to being featured in national publications such as The New York Times. Her medical essays and commentary have appeared in the New England Journal of Medicine, Psychology Today, Kevin MD, STAT, public radio and elsewhere.