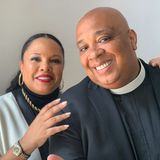 Joseph “Rev Run” Simmons, the front man of the seminal hip-hop group RUN DMC, has sold tens of millions of records around the world and is widely credited for ushering rap music into mainstream culture. Recently inducted into the Rock & Roll Hall of Fame, the group was also the first rap act to earn a Grammy Lifetime Achievement Award. Rev Run remains a dynamic figure in entertainment today, and with his wife of more than twenty-five years, Justine, he has starred on shows including Run’s House, All About the Washingtons, and Rev Run’s Sunday Suppers. Through their television endeavors and their book Take Back Your Family: A Challenge to America’s Parents, Rev Run and Justine strive to make their family values, humor, and spirituality as visible as possible. Family remains their biggest focus, and their playful, loving relationship is an inspiration for many.