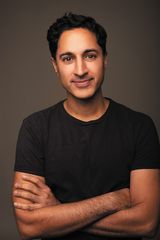 Maulik Pancholy is an award-winning actor whose career has spanned hit television shows (30 Rock, Whitney), animated favorites (Phineas and Ferb, Sanjay and Craig), the Broadway stage, and films. He served on President Barack Obama’s Advisory Commission on Asian Americans and Pacific Islanders, and he is the cofounder of the anti-bullying campaign Act to Change. Maulik lives in Brooklyn, New York, with his husband, Ryan, and his dog, T-Rex. The Best at It is his debut novel.