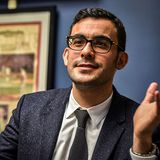 Yousef Bashir is a Palestinian-American from the Gaza Strip, the son of Khalil Bashir, a highly respected educator. Still suffering the effects of a near catastrophic injury at the hands of an anonymous IDF soldier, Yousef made his way to the United States where he earned a BA in International Affairs from Northeastern University and an MA in Co-existence and Conflict from Brandeis University. Now living in Washington DC, Bashir has worked on Capitol Hill, and served as a member of the Palestinian Diplomatic Delegation to the United States. Yousef is an accomplished author, a vigorous advocate of Israeli-Palestinian peace, and much sought-after public speaker.