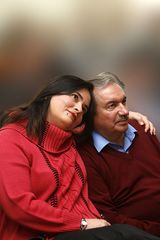 Marina And Sergey Dyachenko, a former actress and a former psychiatrist, are the coauthors of twenty-eight novels and numerous short stories and screenplays. They were born in Ukraine, lived in Russia, and now live in the United States. Their books have been translated into several foreign languages and awarded multiple literary and film prizes, including the 2005 Eurocon award for Best Author. They live in Marina Del Rey, California.