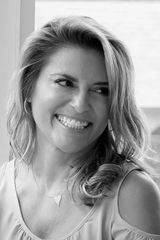 ANGELA C. SANTOMERO is the co-creator, for the award-winning Blue’s Clues, and the creator of the smash hit Daniel Tiger’s Neighborhood and Super Why!; Creative Galaxy and Wishenpoof; and Charlie’s Colorforms City. The chief creative officer of 9 Story Media Group, she is the recipient of a Peabody Award, two Television Critics Association Awards, and the 2018 World Screen’s Kids Trendsetter Award. She has been nominated for more than twenty-five Emmy Awards and numerous Parents’ Choice Gold and Silver Awards. Angela is the author of Preschool Clues and blogs on AngelasClues.com. She lives in New York with her husband, two daughters, and two puppies.