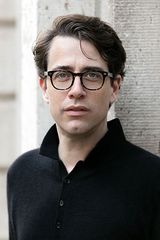 Benjamin Moser was born in Houston. He is the author of Why This World: A Biography of Clarice Lispector, a finalist for the National Book Critics' Circle Award and a New York Times Notable Book. For his work bringing Clarice Lispector to international prominence, he received Brazil’s first State Prize for Cultural Diplomacy. He has published translations from French, Spanish, Portuguese, and Dutch. A former books columnist for Harper's Magazine and The New York Times Book Review, he has also written for The New Yorker, Conde Nast Traveler, and The New York Review of Books.