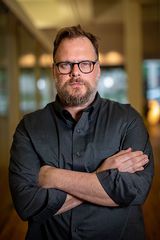 John Hornor Jacobs' first novel, Southern Gods, was shortlisted for the Bram Stoker Award for First Novel. His young adult series, The Incarcerado Trilogy comprised of The Twelve-Fingered Boy, The Shibboleth, and The Conformity, was described by Cory Doctorow of Boing Boing as "amazing" and received a starred Booklist review. His Fisk & Shoe fantasy series composed of The Incorruptibles, Foreign Devils, and Infernal Machines has thrice been shortlisted for the David Gemmell Award and was described by Patrick Rothfuss like so: "One part ancient Rome, two parts wild west, one part Faust. A pinch of Tolkien, of Lovecraft, of Dante. This is strange alchemy, a recipe I’ve never seen before. I wish more books were as fresh and brave as this." His fiction has appeared in Playboy Magazine, Cemetery Dance, Apex Magazine. Follow him on Twitter at @johnhornor.