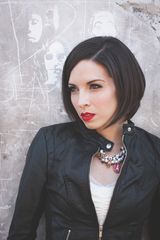 Courtney Alameda is a writer, veteran bookseller, and librarian. Her debut novel, Shutter, was nominated for a Bram Stoker Award and hailed as a “standout in the genre” by School Library Journal. She also wrote the YA novel Pitch Dark—a Junior Library Guild selection—as well as Sisters of Sorrow, a comic book series she cowrote with Sons of Anarchy screenwriter Kurt Sutter. She holds a degree in English literature with an emphasis on creative writing. A Northern California native, she now resides in Idaho with her husband, legions of books, and a tiny five-pound cat with a giant personality. Learn more about her at www.courtneyalameda.com.