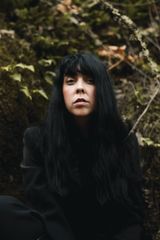 Tehlor Kay Mejia is the author of the critically acclaimed young adult fantasy novel We Set the Dark on Fire as well as its sequel, We Unleash the Merciless Storm; Miss Meteor (co-written with National Book Award nominee Anna-Marie McLemore); and her middle grade debut, Paola Santiago and the River of Tears.

Her debut novel received six starred reviews and was chosen as an Indie Next Pick and a Junior Library Guild selection, as well as being an IndieBound bestseller in the Pacific Northwest region. It has been featured in Seventeen, Cosmopolitan, and O The Oprah Magazine and named a best book of 2019 by Kirkus and School Library Journal.