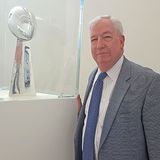 Bob Lederer is a writer and the founder of RFL Communications. A former resident of Flushing, New York, and current Jets fan from the team’s inception in 1963, he scrupulously followed the New York Jets through its early ups and downs—and its transformation into a championship contender. The Jets’ victory on January 12, 1969, when Bob was sixteen-years-old, was the most exciting sports day in his life. Now sixty-four, he has waited years to learn the full story from Joe Namath’s teammates, and can’t wait to share the Super Bowl-winning team’s story with Jets and football fans. He lives in Illinois.