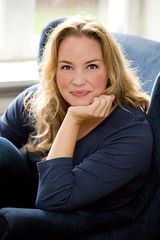 Emmy Abrahamson was born in 1976. She has written four YA books and was nominated for the August Prize in 2012 for THE ONLY WAY IS UP (Only väg is upp). When she met her husband he was actually living in a bush. He was barefoot and dirty, but he was also the funniest, happiest and most charming person she’d ever met. HOW TO FALL IN LOVE WITH A MAN WHO LIVES IN A BUSH is a fictionalised version of their story, and Emmy’s first novel for adults.