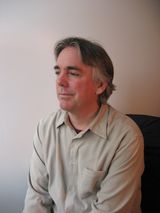 Barry E. Jackson works as a designer, director, and writer. His screen credits include films such as The Prince of Egypt, The Nightmare Before Christmas, and The Grinch, and he was one of several production designers for Shrek. Prior to his movie career, Jackson created art for album covers, posters, and magazine editorials. He lives in Studio City, California, with his wife and two children, Rachel and Weston. Danny Diamondback is his first children's picture book.