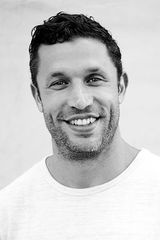 Aubrey Marcus is an experimentalist, unconventional fitness junkie, and human optimizer. He is the CEO of Onnit, an optimal human performance company that he has built into one of the fastest growing companies in America. Aubrey’s personal and professional mission rests on a single question: How can humans get the most out of our bodies, minds, and systems as a whole on a daily basis? His ability to answer that question has drawn dozens of elite performers, hundreds of thousands of customers, and millions of fans to Onnit. Aubrey lives in Austin, Texas.