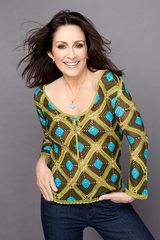 Patricia Heaton stars on ABC’s hit sitcom The Middle and on the Food Network show Patricia Heaton Parties. She has received three Emmy Awards, one for Outstanding Culinary Program and two for Outstanding Lead Actress in a Comedy Series, and has been nominated seven times. She is the author of the New York Times bestseller Motherhood and Hollywood; runs the production company FourBoys Entertainment with her husband of more than twenty-five years, David Hunt; and is the mother of four sons. Patricia lives in Los Angeles.