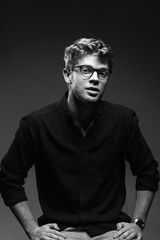 Samuel Miller was born and raised in Vermillion, South Dakota, and now resides in Los Angeles, where, in addition to writing, he directs music videos and coaches Little League Baseball. He began writing his first novel while on tour in a fifteen-passenger van with the rock band Paradise Fears. A Lite Too Bright is his debut novel. Currently he attends graduate school at the University of Southern California. He credits his existence entirely to two spectacular parents, three brothers, one sister, and the best and sweetest puppy dog on the whole planet, Addison.