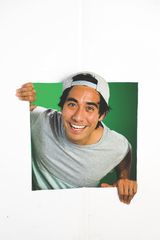 Zach King is a twenty-six-year-old filmmaker who creates videos with a hint of “magic.” With more than 25 million followers across his various social platforms, Zach King is one of the hottest names in digital media. He’s been featured on Ellen and on the red carpet at the Academy Awards—and he’s partnered with Lego, Disney, and Kellogg’s to create mind-blowing videos. In 2016, Zach and his wife, Rachel, competed in The Amazing Race along with other social media superstars. Born and raised in Portland, Oregon, Zach now lives with his wife in Los Angeles, California, and has founded a multimedia production company to expand and create imaginative content for fans around the world.