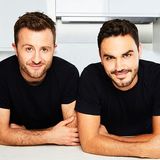 Henry Firth and Ian Theasby are the founders of BOSH, the largest plant-based video channel on Facebook. They both adopted a plant-based lifestyle and in 2016 they started BOSH. In just two years they have generated a following that reaches over 25 million people a month. Best friends, Henry and Ian now live and work together at their BOSH! studio in London.