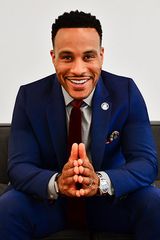 is a bestselling author, spiritual success coach, and the CEO of Franklin Entertainment, a production company in conjunction with 20th Century Fox. He is the producer of the box office hit Miracles from Heaven and the animated film, The Star. He's Dr. Oz's go-to for spiritual success coaching on The Dr. Oz Show and he's the co-host of the TLC event series, This Is Life Live.

named DeVon one of the "10 Producers to Watch" and Beliefnet called him one of the "Most Influential Christians Under 40." He is the author of the New York Times bestseller, The Wait, co-written with his wife, award-winning actress Meagan Good and the best-selling Produced By Faith.