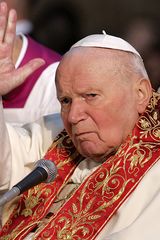 Karol Józef Wojtyla (1920–2005), known as John Paul II since his election to the papacy in 1978, was born in Wadowice, Poland. As a young man he enrolled in a drama school but then was forced to work in a quarry and a chemical factory during the Nazi occupation to avoid deportation to Germany. In 1942, aware of his call to the priesthood, he began courses in the clandestine seminary of Cracow. He was ordained to the priesthood in 1946 and then in 1964 he was nominated as Archbishop of Cracow by Pope Paul VI, who made him a cardinal 1967.

During his pontificate, John Paul II inspired literally millions of the faithful through pilgrimages and during his hundreds of pastoral visits around the world, as well as through his many sermons and written works. As the successor of Peter and Vicar of Jesus Christ, he revolutionized the office of the modern pope. He took his mission out of the Vatican and around the globe, pushing back the boundaries of the old Christian Europe, while proselytizing, reforming, and opening new churches around the world.