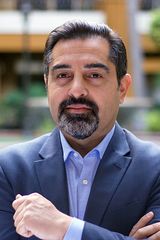 Dean Sherzai, MD, PhD, is Co-Director of the Alzheimer's Prevention Program at Loma Linda University Health, where he was previously the Director of the Memory and Aging Center as well as Director of Research. During his years at Loma Linda, a Blue Zone community where residents live measurably longer and healthier lives, he was the lead scientist studying the effects of healthy living on cognitive aging. Dean trained in Neurology at Georgetown University School of Medicine and completed fellowships in neurodegenerative disease and dementia at the National Institutes of Health and UC-San Diego, where he studied under Dr. Leon Thal, one of the world’s most renowned dementia researchers, and Dr. Dilip Jeste, the world’s foremost specialist in cognitive aging. He also holds a PhD in Healthcare Leadership with a focus on community health, and a Masters in Public Health from Loma Linda University, where his research focused on the prevention of cognitive decline through lifestyle changes. Dean has won several awards and published numerous scientific papers, including comprehensive reviews on nutrition and neurodegenerative disease and a recent meta-analysis of cognitive training and memory improvement.