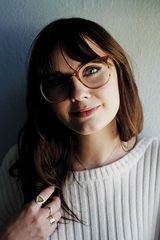 Arden Rose is an actress, a producer, a comedian, and the creator of the wildly popular YouTube channel Arden Rose. Her devotion to creating content that is equal parts quirky and sophisticated has helped her build a loyal following of millions of fans. Arden can be seen on Verizon’s go90 social entertainment platform, starring in New Form Digital’s Mr. Student Body President, produced by Ron Howard and Brian Grazer, and in the second season of the hit show Guidance.