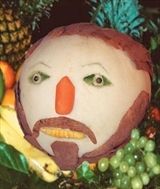 Brock Lee is the nom legume of author Paul Eagle. Paul's attraction to vegetables began at an early age, when his thematic sculpture for the high school prom, Bridge Over Troubled Watercress, was a major hit. Paul eventually traded in his carving knife for a T-square and pursued a successful career as an architectural consultant, but feeling tugged by his vegetable roots, he started creating centerpieces for social get-togethers. He is a strict non-vegetarian.