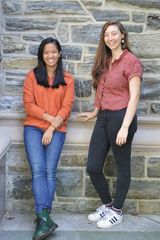 Andrea “Andy” Gonzales is a graduate of Hunter College High School and is now attending the University of North Carolina at Chapel Hill as a Robertson Scholar. The summer before her freshman year of high school, Andy started learning to code. Since then, she’s been passionate about computer science and women in science, technology, engineering, and mathematics (STEM). When Andy attended Girls Who Code, she learned the power of working with other girls, and that led to the creation of the video game Tampon Run, which she co-built with Sophie Houser. Tampon Run’s success exceeded all expectations, and Andy was thrown into a world outside of her high school. Beyond her passion for computer science, Andy is a music, comic book, and video game enthusiast. She looks forward to remaining an active advocate for women in computer science.