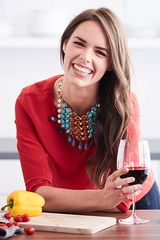 After graduating from Harvard in 2009, Serena followed her passion for food to Le Cordon Bleu Paris, receiving her cuisine diploma in 2011. Since then, she has put her culinary skills to work as a private chef, food writer, recipe developer, and blogger at Domesticate-Me.com.

She is currently a food contributor for ELLE.com and a member of SELF Magazine’s SelfMade Collective (an elite group of 25 influencers in the lifestyle space), as well as the former private chef for two players on the New York Giants. She also creates regular video content for her growing YouTube channel.

Serena’s writing, recipes and photography have been featured on The Huffington Post, SHAPE.com, SELF. Com, BetterHomesandGardens.com, WomensHealth.com, BuzzFeed and POPSUGAR among others. She has also appeared as a guest on The Dr. Oz Show and Martha Stewart’s Radio Show "Mostly Martha."