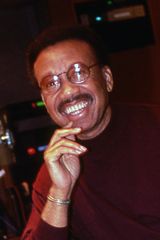 Maurice White (1941—2016) worked in the music industry for more than forty years as a bandleader, songwriter, producer, and musician. He founded the legendary group Earth, Wind & Fire and served as its main songwriter and record producer, and as its co—lead singer. White won six Grammys and three NAACP Image Awards, and was inducted into the Rock and Roll Hall of Fame.