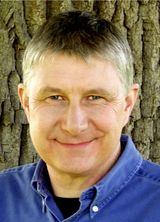 Nick Butterworth was born in London and grew up in a sweet shop in Essex. He worked for various major graphic design companies before becoming a full-time author and illustrator. Among his picture books are Thud!, QPootle5, Jingle Bells, Albert le Blanc, Tiger and The Whisperer, winner of the Nestlé Gold Award. But he is best known for his stories about Percy the Park Keeper, which have sold more than 9 million copies worldwide. Percy has also appeared in his own television series.