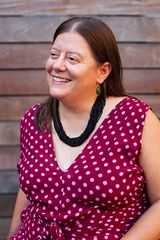 Julie Schwietert Collazo is a bilingual (English-Spanish) writer, editor, and translator, and a former creative arts therapist. She has co-written and edited a book about Pope Francis, which has been translated into more than a dozen languages and is a bestseller in Italy. Her work has appeared in a number of media outlets, including Outside, Scientific American, Discover, Latina, The Guardian, and Time, and she has contributed to several books. She lives in New York City.