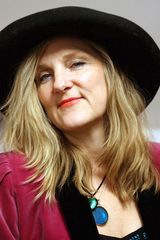 Marie Wilson was born to a paint merchant and an Olympic runner in Vancouver, BC. After studying painting and theatre at UBC and SFU, she moved to Toronto to put herself on the boards. Following appearances on some of Toronto’s best stages, she turned her attention to writing. Marie has published work in a number of magazines and newspapers, including NOW and The Globe and Mail, had a handful of good reviews, met some great people, found love, and birthed three geniuses along the way.