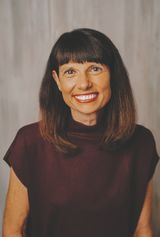 Margaret Peterson Haddix grew up on a farm in Ohio. As a kid, she knew two girls who had the exact same first, middle, and last names and shared the same birthday—only one year apart—and she always thought that was bizarre.

As an adult, Haddix worked as a newspaper reporter and copy editor in Indiana before her first book, Running Out of Time, was published. She has since written more than forty books for kids and teens, including the Greystone Secrets series, the Shadow Children series, the Missing series, the Children of Exile series, and lots of stand-alones. Haddix and her husband, Doug, now live in Columbus, Ohio, where they raised their two kids. You can learn more about her at www.haddixbooks.com.