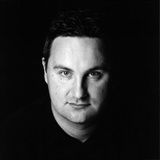 Born in Dublin in 1973, Oisín McGann spent his childhood there and in Drogheda, County Louth. Art college ruined any chance he had of getting a real job, so when he left in 1992 he set himself up as a freelance illustrator. In 1998, he moved to London, and through no fault of his own, he ended up working in advertising as an art director and copywriter. After three and a half years, he began to fear for his immortal soul. He returned to Ireland in the summer of 2002 much as he had left—with no job, no home, and some meager savings.

Ever the optimist, he now works once more as an illustrator and mercenary artist by day and escapist writer by night.