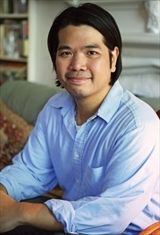 Wai Hon Chu was born in Hong Kong and now lives in New York City's Chinatown. After graduating from the City University of New York, he pursued his culinary training at the Art Institute of New York and has cooked in a number of prominent restaurants in Manhattan. In 1999, he launched El Eden Chocolates, which grew into an East Village storefront offering more than twenty-five truffle varieties nationwide. Chu currently works as a cooking instructor at the Institute of Culinary Education, the Natural Gourmet Institute, and the Bowery Culinary Center at Whole Foods Market.