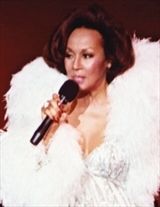 Diahann Carroll is a legendary singer; theatrical, television, and film actress; Tony and Golden Globe Award winner; and Emmy, Oscar, and Grammy nominee. A veteran of the entertainment industry whose pioneering career has inspired many, Diahann made her Broadway stage debut starring in Harold Arlen and Truman Capote's House of Flowers. After seeing her in this production, Richard Rodgers created as a starring vehicle for Carroll the Broadway production No Strings, for which she won the Tony Award. Her recent theatrical appearances have also garnered acclaim, including her role as the "ultimate" Norma Desmond in Sunset Boulevard. Widely known as a pioneer, in 1968 she became the first black actress in television history to star in her own series, Julia, for NBC, which soared to the top of the Nielsen ratings and received an Emmy nomination. Other notable roles include the title role in Claudine, for which she was nominated for an Academy Award for Best Actress, and Dominique Deveraux in the wildly popular television series Dynasty. She has worked with legends such as Paul Newman, Sidney Poitier, Judy Garland, Michael Caine, Harry Belafonte, James Earl Jones, Sammy Davis, Jr., and Frank Sinatra. In no apparent rush to settle down, Carroll most recently appeared on ABC's Grey's Anatomy, for which she was nominated for an Emmy, and in a cabaret show that is currently touring the country, The Life and Times of Diahann Carroll.