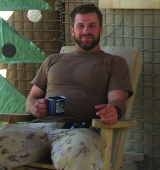 ROBERT SEMRAU is a former combat soldier with the 3rd Battalion, the Royal Canadian Regiment; he deployed with Task Force 3-08 Battle Group in Helmand and Kandahar provinces in Afghanistan in 2008. A captain, he led a small, specialized unit of Canadian mentors working side by side with the Afghan National Army during combat operations. Married to the same incredible woman who saw him through the ordeal and the father of two girls, Semrau is now employed as a security consultant around the world.