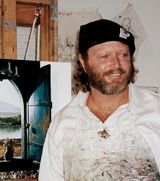 Dean Morrissey has made up stories to go with his work ever since he first began to paint. Eventually he began writing and illustrating children’s books. The highly successful Ship of Dreams, a New York Times Best Illustrated Book, was published in 1990, followed by The Great Kettles, which won a Gold Medal from the Society of Illustrators. His other books include The Christmas Ship, The Moon Robber, The Monster Trap, and The Crimson Comet. Dean Morrissey lives on the south shore of Massachusetts with his wife and son, surrounded by many of the amazing contraptions that are found in his paintings.