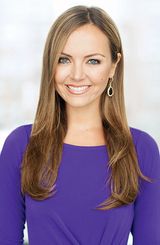 NICOLE LAPIN is a finance expert you don’t need a dictionary to understand. She got her start in finance at age 18, reporting from the floor of the Chicago Mercantile Exchange for First Business Network. She went on to become the youngest anchor ever at CNN and then to claim the same title at CNBC, where she anchored the only global finance show on the network, “Worldwide Exchange,” while contributing financial reports to MSNBC and “Today.” Lapin has also served as a business anchor and special correspondent for Bloomberg Television. She is the money saving correspondent for “The Wendy Williams Show” and reports on the business of Hollywood for “The Insider.” She is also the creator and host of the AOL Originals show, “I’ll Never Forget My First,” where she interviews influential women about the first time they knew they made it. She is the host and judge of the CW original show “Hatched,” a retail invention competition show, which airs on Saturday mornings at 11:00am ET/PT, and was recently named as GoBankingRate's 2015 Money Idol. Lapin has earned the Accredited Investment Fiduciary (AIF®) certification. She graduated summa cum laude and as the valedictorian of her class at Northwestern University’s Medill School of Journalism.