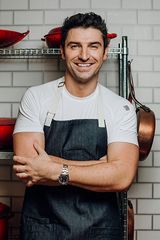 Stuart O’Keeffe is an Irish-born, California-based chef and best-selling author. He appears frequently on TV, starring in Food Network shows such as Private Chefs of Beverly Hills and Let’s Eat, and he has appeared as a judge on Chopped, in addition to numerous appearances on Today and Rachael Ray where he offers fun, simple recipes to get home cooks into the kitchen. His first cookbook, The Quick Six Fix, was released in 2016 by HarperCollins. Stuart received his degree in Culinary Arts from the Dublin Institute of Technology and trained in Bordeaux and the Napa Valley before moving to Los Angeles where he watches the Housewives with his two Westies, Jack and Bo. Keep up to date with Stuart at tastybites.net, @ChefStuart_ on Twitter and @chefstuartokeeffe on Instagram, and Chef Stuart O’Keeffe on Facebook and YouTube.