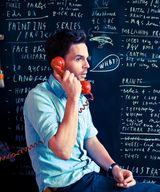 Oliver Jeffers makes art and tells stories. From his much-loved debut, How to Catch a Star, Oliver has gone on to create a collection of award-winning and bestselling picture books (including the illustrations for The Day the Crayons Quit, written by Drew Daywalt), which have been translated into many languages all over the world. Originally from Northern Ireland, Oliver now lives and works in Brooklyn, New York. Oliver used to have an imaginary friend called Egbert. But Egbert stole his bicycle and was last seen pedaling west as hard as he could. That was seventeen years ago.