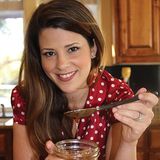 After losing 150 pounds in 11 months, Audrey Johns started the blog Lose Weight by Eating and wrote her first book, Lose Weight by Eating: 130 Amazing Clean-Eating Recipe Makeovers for Guilt-Free Comfort Food, which have inspired many thousands of people to lose weight. Her story has been featured on CBS’s The Doctors, The Rachael Ray Show, and The 700 Club, and on the cover of Woman’s World and Indulge magazines, and she was a chef contestant on the second season of ABC’s The Taste.