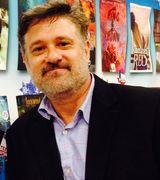 Michael Fry has been a cartoonist and bestselling writer for over thirty years. He has created or cocreated four internationally syndicated comic strips, including Over the Hedge, which is featured in newspapers nationwide and was adapted into the DreamWorks Animation hit animated movie of the same name. He is also the author and illustrator of the bestselling middle grade novel series How to Be a Supervillain and The Odd Squad. He lives on a small ranch near Austin, Texas, with his wife, Kim, and a dozen or so unnamed shrub-eating cows. Follow him on Twitter at @MFryActual.