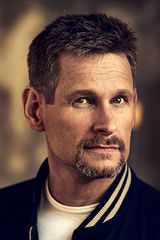 Robert Karjel was a lieutenant colonel in the Swedish Air Force for 25 years. His job as a helicopter pilot took him all over the world, from peace-keeping missions in Afghanistan to pirate-hunting in Somalia, and he is the only Swedish pilot who has trained with the U.S. Marine Corps and flown its attack helicopters. He is the author of The Swede, his first novel to be published in English, and one of the most sought-after motivational speakers in Sweden. He lives with his family outside of Stockholm.