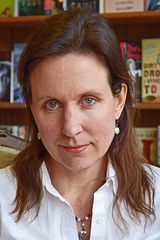 Carrie practices energy and environmental law on behalf of farmers, ranchers, and Native Americans, and does a little writing, from an office in Billings, Montana. Her ancestors homesteaded in Montana in 1864 and survived every sort of calamity and absurdity, so the publishing industry seems pretty tame to her by comparison.

Carrie’s improbable but apparently nonfiction résumé includes a degree in English and French from Bryn Mawr College, a Rhodes Scholarship, a doctorate in modern languages from Oxford University, and a Yale law degree. She has always been a writer. “The writing comes easily,” she says. “It’s what I’m always doing in the background, whatever else is going on. It’s like my resting pulse rate to be scribbling what’s happening in my head. If I didn’t, I’d be wandering the streets talking to myself. Sometimes I do that anyway.”

In 2006, Carrie founded the legal nonprofit Plains Justice, which provides public interest energy and environmental legal services in the northern plains states. Carrie and Plains Justice have played a key role in halting several new coal plants, enacting clean energy reforms, and launching the Keystone XL pipeline campaign. “I’m still involved in Plains Justice, but I went back to private practice in 2012. Running a nonprofit takes a unique blend of selflessness and enough raging narcissism to think you really can change the world. The burnout rate is similar to that of telemarketers.”

A licensed private pilot and committed introvert, Carrie hikes, skis, and fishes the Montana wilderness with her family in her spare time. Her work has appeared in such diverse media as Grist, Harvard Law and Policy Review, The Huffington Post, Mother Jones, and Salon.