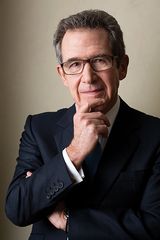 John Browne was the CEO of BP from 1995 to 2007, which he transformed into one of the world's largest companies. He was the president of the Royal Academy of Engineering and is a fellow of the Royal Society, a foreign member of the American Academy of Arts and Sciences, and the chairman of the trustees of the Tate galleries. He holds degrees from Cambridge and Stanford Universities, was knighted in 1998, and made a life peer in 2001. He is now a partner at Riverstone Holdings, and is the author of the memoir Beyond Business and of Seven Elements That Changed the World.