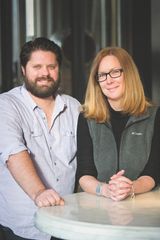 Julia Durango lives in Ottawa, Illinois, with her two teenage sons. She first fell in love with video games when she bought a Nintendo 64 for her oldest son, Kyle, on the birth of his baby brother, Ryan. Many hours of game play and several game systems later, both boys have long surpassed Julia in video-gaming prowess, though she still clings to a time when Kyle would beg her to beat the bosses for him in The Legend of Zelda: Ocarina of Time and Ryan envied her super-posh village in Animal Crossing.